When Will I Receive the Final Autopsy Report?

Home / Private Autopsy / When Will I Receive the Final Autopsy Report? 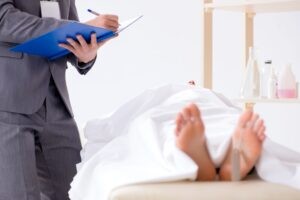 When families request a private autopsy, they’re usually looking for answers regarding their loved one’s death, such as the cause and time of death, that a medical examiner or coroner decided not to provide by performing a routine autopsy themselves. And, understandably, family members want those answers as soon as possible. After all, the information that an autopsy provides can allow grieving family members to heal and achieve the closure they need to continue on without their loved one with them.

Depending on the circumstances of your loved one’s death, preliminary findings from a private autopsy may be available as soon as 24 hours after Dr. Chundru performed the procedure.

But, other aspects of an autopsy – such as receiving toxicology reports and the final autopsy report – can take more time.

You’re probably already aware that it takes an extended amount of time for families to receive the final autopsy report from a medical examiner or coroner – usually about six weeks. This fact is often publicized by the media if there is a high-profile homicide or suspicious death in your community.

But why does it take so long to get a report from a typical autopsy?

The answer lies largely in the backlog of the lab which processes autopsy samples, such as toxicology and histology samples, from the procedure. Because city, county, and state coroners and medical examiners usually contract with one or just a few labs to process their autopsy samplings, receiving final results can take a while when the lab has a high number of samples to perform. This is especially true if you live in a highly populated metropolitan area.

When Dr. Chundru performs a private autopsy for his clients, he has more options in terms of choosing a lab to process the autopsy samples than a city, county, or state coroner or medical examiner typically does. Depending on your location, this may translate into Dr. Chundru’s selected lab being able to process all samples faster than a jurisdiction’s lab can. Ultimately, this may provide you with a final autopsy report and the answers you desperately want faster than the average 6 week turnaround time.

Learning More About the Differences Between a Traditional and Private Autopsy

If you’ve been told that your local medical examiner or coroner isn’t going to perform an autopsy on your loved one, but you want the answers that one provides, Dr. Chundru is available to conduct a private autopsy anywhere in the United States. Typically performed in your chosen funeral home, this procedure takes about one and a half to two hours to complete, and won’t interfere with your ability to have an open casket or viewing for your family member’s funeral services.

To talk to Dr. Chundru to learn more about private autopsies and how they differ from one conducted by a local jurisdiction, schedule a consultation with him today.